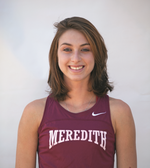 Lara Pantlin, M.S.  is a 4th year graduate student joining us from Meredith College, where she was a cross country student-athlete and was named the USA South Athletic Conference’s 2014 Woman of the Year. Lara is interested in studying neurophysiological markers associated with the development of psychopathology, particularly in those who are at risk for psychosis.

Marielle Darwin, B.S. is a 2nd year graduate student. She graduated from the University at Buffalo, The State University of New York.  Marielle's Honor Thesis was, "The Effect of Biofeedback Training on Aggressive Outbursts in Individuals with Traumatic Brain Injury".  We are excited to have Marielle with us!

Where are they now?

Barbara Banz, PhD.
Barbara graduated in 2014 and is currently a Postdoctoral Associate in the Department of Emergency Medicine at Yale University School of
Medicine.

Alana Campbell, PhD.
Alana graduated in 2012 and is currently an Assistant Professor at the University of North Carolina Medical School, Department of Psychiatry.

Davalos, D. B., Campbell, A., Pala, A. (2009). Maternal depression and the effects on mother child bonding during the early years. In Cuyler & Ackhart (Eds.). Psychology of Relationships. New York: Nova Science Publishers

Elizabeth Andersen, PhD (formerly Elizabeth Burnette) received her B.S. from CSU in 2010 and defended her dissertation,“Convergence of aberrant electrophysiological correlates of salience, affective processing and stress reactivity in patients with schizophrenia” as part of her PhD in Neurobiology at the University of North Carolina Medical School. She is a Howard Hughes Medical Institute Scholar and she studies the neural correlates of schizophrenia in order to better understand the processes involved in illness onset.

Sarah Martinez, MS is  a graduate of the Human Cognition and Neural Dynamics Lab (HCND) at Western Washington University. She studied, "The influence of kindenschema on the processing of other race faces"
​
Martinez, S., & Davalos, D. (2016). Investigating metacognition, cognition, and behavioral deficits of college students with acute traumatic brain injuries. Journal of American college health, 64(5), 390-396.

Greg Ordemann, BS is a graduate student in the Institute for Neuroscience at the University of Texas in Austin.  He is interested in studying cellular processes of learning and memory and the diseases that arise from abnormalities in those systems.

​Savannah Regensburger, BS
Savannah's research and thesis focused on, Growth Mindset, Mindfulness and Neuroplasticity.
She recently was admitted to the MS in Biotechnology Program at the University of California Irvine, starting Fall 2018!

Hannah Crosby, BS, has assisted with research focused on cognition and psychopathology in the lab.

She was recently admitted in to the Master's level Positive Organizational Psychology and Evaluation program at Claremont
​    Graduate University, starting Fall 2018.

Lisa Hirt, BS, has assisted in the lab with research focused on time processing.

Hirt, L. (2017, April). A Look into Timing and Intelligence: A Exploratory Event-Related Potential Study. Oral presentation at the Celebrate Undergraduate Research and Creativity Symposium, Fort Collins, CO.
She was recently admitted in to the Master's program in Modern Human Anatomy at the University of Colorado Anschutz Campus, starting Fall 2018.